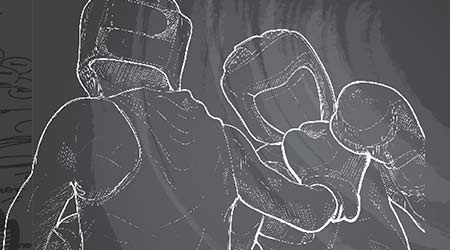 Drafting a fight plan that will keep cleaning in-house

Facility Cleaning Decisions readers oversee an average of 825,000 square feet of cleanable space within facilities. This is a lot of real estate and many building service contractors (BSCs) believe it is ripe for the picking.

Cleaning challenges, staff turnover and tight budgets are all cracks in the in-house armor and contractors are waiting in the wings to exploit them. According to the 2018 Annual Reader Survey, 10 percent of managers have BSCs chomping at the bit to take over cleaning operations. As many as 35 percent of those threats are for individual, specialty tasks such as grounds care, snow removal, window care or laundry.

“This is their foot in the door,” said one survey respondent, “but their overall goal is to take over the entire cleaning program.”

Unfortunately, this is a common occurrence for managers overseeing an in-house custodial program. The survey found that of those threatened, 100 percent of contractors were bidding on the entire cleaning program. In these cases, an outside contractor asks for a meeting and underbids for the contract, leaving managers to defend their existing programs to facility executives — and they aren’t going down without a fight.

Putting Up A Fight

We spoke with a cross-section of veteran facility cleaning managers who have successful cleaning programs in place to ask them how they keep the outsourcing threat at bay. They offered insightful advice, including tactics for making a convincing case, strategies for outsmarting contractors and ways to market staff so as to lower turnover and keep the jobs in-house.

For Keith Webb, Executive Director of Plant Services at Newport News Public Schools (NNPS), Newport News, Virginia, the threat of outsourcing struck close to home when two of his neighboring districts decided to contract out their formerly in-house custodial programs. But before the BSC came knocking on his door, Webb was able to compare the contract of one of those districts with his own in-house service list and budget.

“We used the contractor’s list of services as a baseline and made our own list of tasks that we knew our custodial staff did that were not on their list of services,” says Webb. “We used that comparison as a talking point as we went up the organizational ladder in our defense against outsourcing.”

In his comparisons, Webb noticed the outside contractor charged roughly $1.11 per square foot. His own in-house program came to about $1.31 per square foot, but there were at least 40 items that his program did that were not in the outsourced contract.

“This isn’t to say that the contractor wouldn’t do those things, but they weren’t priced to do them,” says Webb.

“A lot of times what BSCs are doing is trying to say they can do what the in-house service is doing, but at a cheaper rate,” he says. “Sometimes it might be true, but a lot of times, it’s not. They do a base bid and then they charge extra for all the things we do in-house that are expected.”

Aaron Uresti, Assistant Director of Custodial and Housekeeping Services, Facilities Services at University of California in Riverside, also worked as a BSC before joining an in-house program.

“As a BSC, my number one goal was to turn a profit in my accounts,” he says. “So my advice to in-house departments is to be mindful of that, because if your goal is to make profit, some of the other things that are important to service providers such as communication skills, customer service skills and providing a good service can go by the wayside.”

Uresti notes that when profit is the main goal, a contractor might not be using state-of-the-art equipment or following green cleaning procedures because they’re trying to get back with as low of an operating cost as possible. If your in-house program is using these things, or hoping to, then make sure you communicate that with key decision-makers to argue your case and communicate the value of your program.

Service matters, and in an industry where turnover hovers between 15 and 20 percent, it’s important to retain individuals whenever possible.

“When you’ve been working for years with an in-house custodial staff that stays at the same school, the teaching staff and the custodians often become family,” says Webb. “It’s a lot more collegial when you have that sort of dynamic, as opposed to a contractor who is there for a few weeks, then quits or gets moved around.”

next page of this article:
Outsmarting The Competition Keeps Cleaning In-House