Salt is the primary material used for anti-icing or de-icing techniques that manage snow and ice. Knowing the types of salt and the conditions for when they are most effective will help custodial managers control usage. That will lead to controlled spending, efficiency of salt usage and the decreased risk of liability exposure from slip-and-fall claims or damage to infrastructure.

There are three types of salt that are most commonly used (see figure 1). Those include Sodium Chloride (NaCl) — also known as rock salt — Magnesium Chloride (MgCl) and Calcium Chloride (CaCl). Before using or blending the different types of salt, it’s important to first understand the definition.

Salt is a chemical compound formed from a cation, or positively charged ion, attached to an anion, which has a negative charge. The combination prevents ice from bonding, allowing workers to clear areas more effectively.

When Salt Is Most Effective

To effectively use salt, it’s important to know what each type of salt does, and its level of effectiveness to melt ice and snow at different temperature ranges.

The single most important condition, besides temperature, that influences the effectiveness of salt is moisture. Moisture from either the air or from precipitation directly affects salt’s ability to convert to a liquid known as brine.

The effectiveness of salt will also be influenced by existing conditions that affect salt reaction times. This includes vehicle and pedestrian traffic that is required to efficiently break down solid forms of salt.

It’s important for custodial managers to consider all the steps (see figure 2) salt goes through before distributing it. Once that is determined, move on to the type, or blend, of salt most ideal for the situation. 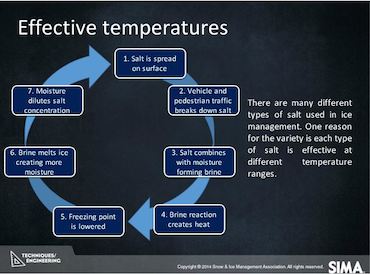 Determining which salt would be appropriate to apply based on varying surface temperatures can be tricky. To simplify things, it’s a good rule of thumb to memorize the ratio 15/5/-25 for when blended salt products are not available.  These numbers are the effective temperatures in Fahrenheit for rock salt, magnesium and calcium (see figure 3) and indicate when each is most ideal for use. 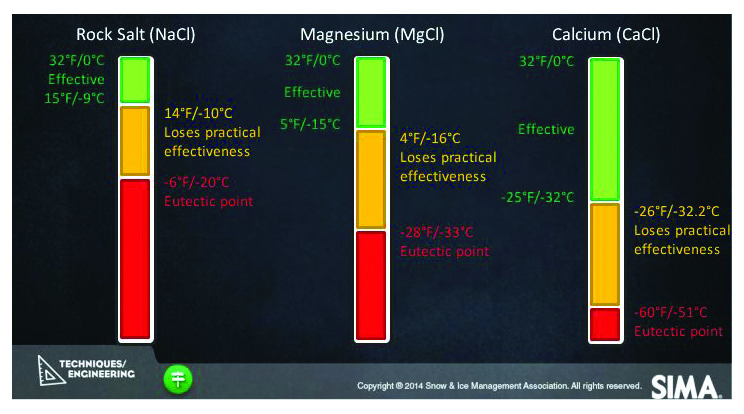 Once managers have identified what products to use, they must determine when they will be most effective.

Salt is available in both solid and liquid forms. In solid form, salt bores into the ice, converting to brine once it reacts with the moisture of the ice. This is typically performed as a de-icing technique, also referred to as a post storm application.

In liquid form, salt is being applied as brine, preventing bonding between the snow/ice and the paved surface. This is typically performed as an anti-icing technique, which is also referred to as pre-treating.

next page of this article:
Tips To Using Blended Salt Products For Ice Melt