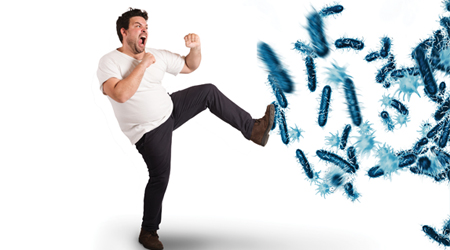 When calculating its impact on the economy, rhinovirus is nothing to sneeze at. This virus, which is the predominant cause of the common cold, is responsible for billions of dollars in medical visits and lost productivity annually. However, compared to norovirus, C.diff and MRSA, rhinovirus garners little attention in the cleaning industry. And although colds are usually more of an inconvenience than a major health threat, rhinoviruses affect virtually everyone at least once, if not several times a year.

“Rhinovirus is almost always spread through the air and can live on hard surfaces for 24 to 48 hours,” says Darrell Hicks, infection control consultant and author of “Infection Prevention for Dummies,” St. Charles, Missouri. Although the virus doesn’t live long once outside of the human body, a cough or sneeze can render it airborne, where it can travel as much as eight to 10 feet, according to Hicks.

To reduce air transmission of the virus, experts encourage those who are infected to cover their mouths when coughing or sneezing. Vicki Allen, Chair of the Communications Committee for the Association for Professionals in Infection Control, recommends teaching and practicing good respiratory etiquette.

“Cover coughs and sneezes by using your upper shirt sleeve to cough and sneeze into,” she says. “And when using tissues, promptly dispose of them after use in a waste receptacle, followed by hand washing.”

Staff and visitors should also wear a mask if they exhibit cold symptoms, particularly in healthcare facilities — or better yet, stay home.

Fairchild Medical Center in Yreka, California, has a cough station for patients who are admitted to the 25-bed hospital.

“If someone is coughing a lot from a cold, or they have the flu, they’re asked to put a mask on,” notes June Thomas, environmental services supervisor. “They’re also asked to use non-alcohol–based wipes to wipe their hands.”

next page of this article:
Preventing The Spread Of Rhinovirus