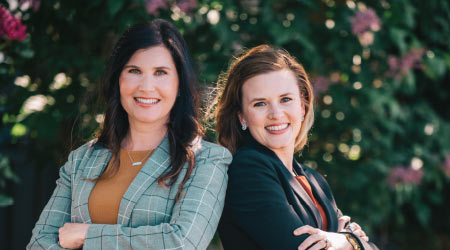 Janelle Bruland is able to keep her company of 25 years thriving thanks to the help of her daughter, Terell Weg

The founder of MSNW Group, Janelle Bruland, started the Ferndale, Washington-based janitorial, maintenance and landscaping company in 1995. Her daughter, Terell Weg, has been involved with the company in one way or another since she was a child, and now leads its day-to-day operations. As the pair celebrate 25 years in business, Bruland remembers what led to the company’s success. In fact, there were a number of large challenges along the way, but Bruland has been able to pivot away from these obstacles often by relying on her gut feelings — a trait Weg herself is starting to demonstrate.

While Bruland’s gut instincts have helped steer most of her big decisions, that doesn’t mean she hasn’t also accepted help from friends. When Bruland started her company, she was semi-green. Yes, she did have business experience through a prior career in management in the medical field, but she knew absolutely nothing about the cleaning industry. Consequently, Bruland guided the company just by plain instinct — until someone threw her a lifesaver of sorts.

Bruland walked into a Building Service Contractor Association International (BSCAI) event in 2002 not sure of what she could expect. She walked out, however, having met warm, inviting people and future mentors.

She remembers one of those mentors had a fabulous company culture that revolved around care — something Bruland herself had greatly wished to establish. Using that as a sort of study guide, Bruland was able to build a strong company culture for which MSNW is known for today.

“We knew that if we took care of our team, then they’d take great care of our clients,” says Bruland.

One way MSNW looks out for its employees is through its “Care Fund.” The program, which started 10 years ago, allows employees to elect whether or not they want to contribute money from each paycheck to a fund that is used to help participating employees facing personal emergencies. Every dollar put into the fund is then matched by MSNW, which has assembled a committee that decides what requests for assistance should be met.

Though paid above industry minimum wage, many of the people joining MSNW are living paycheck-to-paycheck. This means they likely wouldn’t be able to save on their own for an emergency that would even require a moderate amount of reserve funds.

Some of the emergencies that have occurred have been truly dire. On one occasion, the program potentially helped save the life of one of its own. A supervisor helped a worker escape a domestic violence situation by using the care fund to pay for the security deposit on a new apartment.

If building an impressive company culture from the ground up doesn’t sound exhausting, try doing it alongside the economic challenges brought on by the Great Recession. Bruland was able to save MSNW from crashing into the mountainous burden of the post-2008 financial apocalypse and other potential catastrophes.

One lesson she learned along the way is to trust her instincts. In fact, that’s exactly what drove MSNW to success not just after the Great Recession, but during. While many in the industry chose to be conservative and play business safe as the global economy declined, Bruland was brazen enough to call for an expansion. Not a bad call at all for MSNW, as Bruland looks back.

“At the end of the day, that was a bold decision, but because of it we actually grew at that time,” she says. “For others that face challenges like this, I say look at your experience and go with your gut.”

Another difficult event that Bruland was able to circumvent using her experience and instincts was the potential loss of one of the company’s biggest clients. The company (which Bruland did not name) made the shocking announcement that it was declaring bankruptcy just as MSNW entered into a time of full expansion.

What Bruland discovered about herself and her company during the client’s bankruptcy is that both had a penchant for getting caught up in fear from time to time. Fear is obviously a basic human instinct and nothing to which Bruland or her staff could be immune, but it doesn’t have to have any control of life or business, either.

“The lesson learned for me is the important role of a leader,” says Bruland. “In times of challenge, the leader really needs to step up, lead from the front and not become paralyzed by fear.”

Another negative thing that was prevalent at the company during these times was poor communication and gossip. Bruland says she had allowed misalignment to occur on her leadership team during this time, which consequently allowed negative emotions and talk to permeate.

“Leaders in an organization all need to be aligned and all have to be on the same page,” says Bruland.

As a result, MSNW put a policy in place that gossip would be left at the door. Negativity has been banned from MSNW Group and replaced by optimism — a disposition that was once sought after in job candidates, but is now mandatory.

“We hire around that right now,” says Bruland. “It definitely helps to make those expectations clear.”

next page of this article:
A Lesson In Business Succession