The second part of this four-part article details the early days of Frantz Building Services. 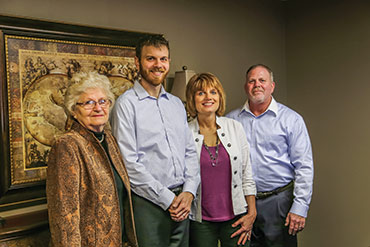 Jordan’s path to becoming the head of a thriving janitorial business took an equally circuitous route.

Growing up in a family with both grandparents and parents involved in business ownership, Jordan had inherited that same entrepreneurial spirit. He just never figured he’d put it to use in the cleaning industry.

“I had never really considered going into our family business,” he says. “Just because, the cleaning industry kind of has this general black cloud over it, you know? It’s not a very sexy industry. So I just hadn’t really thought about it.”

Jordan, of course, didn’t have much of a choice when he was in high school. All of the Tong kids worked at the cleaning company. Kathy and her husband, Mark, wanted the kids to have a job, and working for the family business afforded certain advantages. Kathy and Mark could be flexible with work if the kids had after-school sports or if the family went on a vacation.

“They all grew up knowing they’d be cleaning through the high school years. … Jordan says it was his motivation to go to college,” says Kathy.

Indeed, Jordan remembers, not so fondly, working at one of Frantz’s clients, a local bank, one winter break and being “locked in a warehouse with a giant shredding machine, shredding checks for hours on end.”

It taught the kids to be hard workers, says Kathy.

But at the time, Jordan says he was too young to separate the act of cleaning from the concept of running a cleaning business. He wanted no part of it, so he went off to college at Tennessee Tech University in Cookeville, Tennessee, to study civil engineering. By the time he graduated in 2001, Jordan, like his grandfather, was still harboring the idea of owning a business — just not his grandfather’s business.

“The last thing in the world I thought about was going to work back in my small home town for a cleaning company,” says Jordan.

Today, Frantz Building Services has more than 300 employees. But back when it was founded in 1985, there was just Bernard and Gerfriede.

With plenty of ambition and zero debt — Bernard made a point of borrowing as little as possible, a practice passed down to Jordan — the couple quickly began to build up a customer base, cleaning buildings for $25 a pop, twice a month. They’d prospect for clients during the day, go clean at night, then look for more clients the next day. Soon enough, they hired their first employee, then two, then four.

By the early 1990s, Bernard and Gerfriede had built up the operation to the point where it was clearly going to stay in business. Now it was time to grow.

Mark, Bernard’s son-in-law, had worked for years for his father’s construction company and then briefly for another construction outfit. But he had become burned out from construction work.

It just so happened Bernard, who was starting to get a little older, was looking for someone to take on more of the physical work associated with running the business. This would allow him to focus on the business end.

“He had a vision of the business growing,” says Kathy.

During a layoff between construction jobs in 1992, Mark went to work for Frantz Building Services — and he never looked back.

Kathy, with her youngest child then in preschool, later began helping in the front office.

As time went on, Bernard saw Mark’s potential as a leader. Mark began working more closely with Bernard behind the scenes, and by 1997, Mark acquired ownership and his current position of CEO. Meanwhile, Kathy, with her background in bookkeeping, had taken over the company’s financials by ’94 or ’95, she says. She is now the company’s controller.

In the years that followed, while Mark and Kathy continued to grow the business, Bernard continued to work for the company until close to his death in 2000.

Fifteen years later, Gerfriede still works for the business she helped found. The Frantz Building Services matriarch had served in numerous positions throughout the years, but she always preferred to be involved in the cleaning tasks. Today she’s an area supervisor for the company.

Kathy and Mark — like Jordan — had never really given much thought to who would succeed them as the company’s senior leadership.

“We had never really talked about which of the kids would take it, because we were still pretty young ourselves,” says Kathy. “We just thought maybe eventually we’d just sell it or something, and we hadn’t really gotten to that point.”

Kathy says she thought the engineering profession was a good fit for Jordan, so they never pushed the idea of taking over Frantz Building Services.