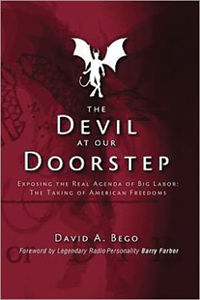 If it seems like Bego takes his fight with the SEIU personal, he’ll be the first one to tell you he does. He often speaks about the incident like a retired general recalling his days of combat e.g. “during the battle,” “our army,”“union’s foot soldiers, “fending off the enemy,”our “Three-Year-War.”

“He’s put his blood, sweat and tears into the company since day one,” explains Bego’s daughter Kelly, the company’s director of coversight. “He has a lot of pride in our country, and believes in the work he’s done to provide people those (employment) opportunities. He wasn’t about to give in.”

Bego also wanted to share his story with others. In 2009, he self-published a memoir, “The Devil At My Doorstep: How I Survived A Three-Tear War With Big Labor And Protected My Employees And Business.”

The book propelled Bego into the talk radio circuit, an arena where he serves as a voice of anti-compulsory unionism. In 2012, he published an update, "The Devil At Our Doorstep."

Bego has appeared as a guest on various radio and TV programs, including with Lou Dobbs on the Fox Business Network, and as a speaker for organizations such as The Heritage Foundation.

These days, Bego is happy to put the SEIU attack on the backburner. Back at EMS headquarters, Bego leans thoughtfully in his maroon leather office chair. Around the perimeter of his office are shelves lined with business books, sports memorabilia and family photos.

On one shelf, a Father’s Day card is fashioned like the Presidential Seal and reads: “Dad-in-Chief.”

Though he continues to contribute to the political discourse surrounding compulsory unionism, Bego has kept his focus on the business. He spends his free time with family, and often hits the green at his childhood golf course, Maple Creek Golf & Country Club — a property he purchased.

In a sense, Bego has returned to living The American Dream, albeit cautiously.

“I became an author not to be famous, but because I wanted to wake up the American people,” Bego says. ”I’m amazed more business people won’t stand up and say ‘No’ to the union. We see ourselves as a company with integrity, that stands up for what is right.”

“It’s the American Way,” he adds