Nearly a third of the janitorial workforce is aged 55 and older, according to the U.S. Bureau of Labor Statistics (BLS). When these workers start retiring, who is going to fill the void? In this stereotyped “unglamorous” industry, there isn’t a line of qualified individuals waiting to break in.

Brian Benz, CEO of Team Clean Inc. in Honolulu, saw this writing on the wall and took action. After reading an article in a Hawaiian newspaper, Benz estimated that roughly 10,000 Hawaiian hospitality workers — including many at his own company — would reach retirement age in the next four to five years. In a state that relies on tourism as its main economic contributor, it’s vital for Benz to fill these positions. 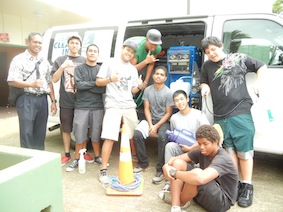 Benz’s strategy is to tap into the huge Millennial workforce as early as possible — while they are still in high school. Along with retired principals Randy Higa and Beatrice Zane, Benz created the Ho’okipa Workforce Academy to get students “career ready” by teaching the real-world skills needed in the cleaning and hospitality industries. The class also counts for credits toward high school graduation.

“As a businessman, I need entry level labor that is work ready,” says Benz. “But as a community member, I have a responsibility (kuleana) to my community to raise our young (keiki).”

To launch the program, the trio approached administrators at Kaimuki High School near Waikiki, a popular tourist destination with a large quantity of hotels. Juniors who were interested in working  in the hospitality industry and may have needed some help earning credits for graduation were hand-picked by school counselors to participate in the program.

Students were offered one credit for 120 hours of classroom work and another credit if they completed 120 hours of on-the-job experience. In its debut summer program in 2013, 29 students enrolled in the classroom portion, of which 27 then applied for jobs as janitors, hotel housekeepers, landscapers and foodservice workers.

next page of this article:
Teaching Janitorial Skills To High School Students