Cleaning: CP
Faces Of The Frontline - Sponsored by ProTeam 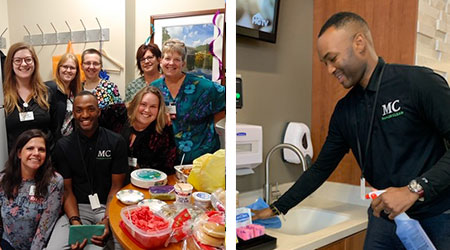 The hard work of janitorial staff members often goes overlooked by customers. But the way Rickevon Johnson does his job cannot be ignored.

Johnson has been employed for three years by MahlerClean, a building service contractor that outsources him to work as a day porter at a healthcare facility. His work, as well as his interaction with customers and employees at the facility, has been so outstanding that the client elected to do something that’s rarely done for outsourced janitorial staff: throw him a party.

The admiration for Johnson was enormous during "Ricky Week," which featured all the staples of a great celebration – cards, balloons, food and a face-to-face "thank you" from staff.

"Ricky does an amazing job and is such a huge part of our team. Our team members know him by name and are happy when they have a chance to converse with him," says Julia Kwiatkowski, human resources manager at MahlerClean. "Not only is he friendly with our team members, but with our patients as well. He always has a smile on his face and says hello, something we greatly appreciate."

Follow Johnson’s work and it’s not hard to see why he is so celebrated. Not one to be idle, Johnson is proactive to the point that he not only finishes work quietly and quickly, but also seeks out more work to do. If he’s ever unsure about a situation, he will make an effort to speak directly with a client to ensure their desires are met. When he comes upon something important, Johnson does not hesitate to relay that information to the appropriate individuals.

"An example of this was when a recent patient passed out in an area where Ricky was working," says Kwiatkowski. "He jumped into action and got nurses on site immediately. Whatever the nurses asked him to do or get, Ricky did without hesitation. You would be hard-pressed to find a person in the building who doesn’t know Ricky by first name."

In addition to being quick on his feet, Johnson also has quite the eye. He has routinely recovered important items that patients have misplaced – sometimes before they even knew they were missing. "Many of these patients are at the clinic for cancer treatment, they have enough on their plate," says Johnson. "I don’t want them to be stressed with missing items."

Cognizant of just how important honesty and integrity are in Johnson’s line of work, the client who he cleans for has grown to greatly trust and respect him.

Each month this section will recognize an outstanding frontline janitor. To nominate a deserving employee, email jake.meister@tradepress.com.