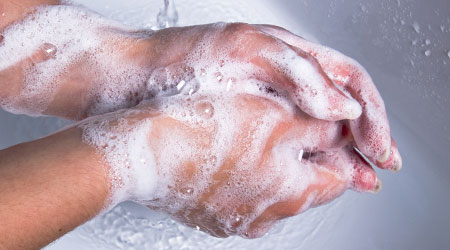 Experts often cite hand washing as the single most important practice in controlling the spread of germs. But what if washing hands left them more bacteria-ridden than they were before a person washed them?

Bacteria from the “bulk” or refillable soap dispenser will remain on the users’ hands even after using the soap, says Dr. Gerba. These include fecal bacteria, which are very tolerant to soap, as well as pseudomonas arogenosa, which causes skins and eye infections.

Study results further demonstrated that bacteria from contaminated hands can be transferred to secondary surfaces — leading to the conclusion that washing with contaminated soap not only defeats the purpose of hand washing but may contribute to the transmission of potentially harmful bacteria.

So how does bulk soap become contaminated? According soap manufacturers, germs are typically introduced to the dispensers when they are refilled with soap.

“Any bulk dispenser can come into contact with germs through the environment,” says Dan Renner, director of marketing for Kutol Products Company, Sharonville, Ohio. “It can be via dirty hands, dirty rags, water or particles in the air during the refill process.”

In some cases, the introduction of contaminants could even be intentional. Refillable soap dispensers are easy targets for vandals, says Thom Wojtkun, market development director for GOJO Industries in Akron, Ohio.

“Open systems are prone to being vandalized,” he says. “Someone with malicious intent can open them and put something into the dispenser. So there’s definitely an unnecessary public health risk [with open systems] due to these contamination sources.”

next page of this article:
Many BSCs Don't See Value In Bulk Dispenser Cleaning