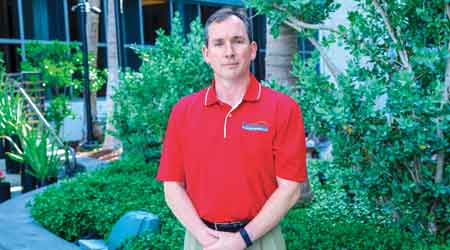 Curtis McLemore, CEO of McLemore Building Maintenance, has helped turn the business his father founded into a nearly $40-million-a-year operation

Curtis McLemore has a goal. As CEO of McLemore Building Maintenance, Houston, the 48-year-old Curtis McClemore wants the company to obtain $50 million a year in annual revenue by the time he hits his target retirement age of 60. Reaching this professional goal seems entirely plausible, as the company was on pace through late spring to gain $39 million in revenue for the year after exceeding $32 million in 2017.

Not only does Curtis have growing revenue on his side, he’s also got the experience of man who has lived the industry since birth.

Holding himself atop waxed buckets at every turn his family’s van took, one of the early lessons the commercial cleaning industry taught Curtis was balance.

Don McLemore founded McLemore Building Service Maintenance, when Curtis, his youngest son, was just six months old. Like many parents who work to raise kids while also running their own business, Don and Torah Lea McLemore took their two sons — Curtis has an older brother, Keith — along to cleaning jobs.

“My dad would drive the van,” says Curtis. “There was no passenger seat, so my mother would sit in a lawn chair where the passenger seat would go and hold my brother, and I was in a playpen in the back. And they would drive from building to building cleaning on weekends.”

It’s a fun image, Curtis and Keith riding around Houston at night, perched on playpens, buckets and laps, while their parents labored on would-be days off in an attempt to carve a greater future for the boys.

That future extended to their school years. And it wasn’t just these car rides that kept Curtis around brooms and brushes. He actually lived in the industry.

In the interest of cutting overhead costs while the business took off, Don and Torah Lea made their home their business. The living room wasn’t for lounging, because it was the office. Vehicles were forced to endure the sweltering Houston heat because toilet paper, hand soap, chemicals and other cleaning products deserved the garage.

Although neither he nor Keith swung mops as kids — the company was big enough to function without them until they were old enough to work — the boys grew up around cleaning.

Janitorial services had been present in his whole life, but it wasn’t what Curtis wanted to do when he turned 18. After graduating high school, he enrolled at the University of Houston with the intention of going into the hospitality industry. Curtis saw hospitality as something different — a field and work atmosphere with a good deal of glamour. Well, that’s what he thought until after graduation.

“I understood that hospitality is a lot more flashy than janitorial service, but once I got my feet wet, I realized that the parallels are the same: it’s working with people, working with the customers, etc. It’s the exact same type of hours and it’s bad hours, too.”

next page of this article:
Earning Respect In The Workplace