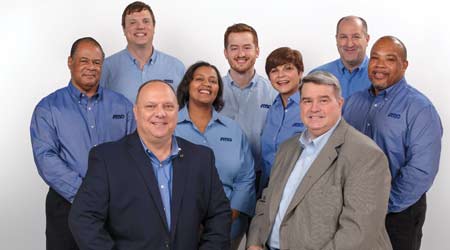 Well into their teen years, the boys’ time together typically consisted of popular adolescent pastimes. Things got professional when Collins was exposed to commercial cleaning by Murphy, whose father, Jimmy, had shown him the business years earlier.

Like many others before him, Jimmy Murphy’s entrance into the business was not substantial, but subtle. Employed as a mail carrier for the United States Postal Service, he started the company, Murphy Services, as a side job. But cleaning went better than planned. Eventually his side venture carried enough business for him to leave his postal job and clean full time.

When he was 8 years old, Murphy got his first shot at janitorial labor. He remembers going with his father and grandfather to service a local dental office. He didn’t do much aside from emptying trash cans, but it was a start.

A few years later Murphy got a real sense of the daily grind of commercial cleaning. At times, a Murphy Services employees would call in sick, and Murphy would be woken from his sleep at night and sent off to work. Tasks like this taught him what hard work was like and the satisfaction one feels after seeing the fruits of his or her labor. It was also during these high school-era night jobs that Murphy brought Collins along to help with floor maintenance duties.

Murphy Services also taught the boys a lot about some of the harsh realities of business ownership and working in commercial cleaning.

Murphy recalls one account he was working for Murphy Services involving a drug rehab center. To this point, Murphy was used to working during evening hours, but this account had to be carried out during the afternoon for security purposes. As a result, Murphy interacted with people who were struggling with serious problems. Though surrounded by people battling their own issues Murphy still felt insecure about the job he was doing — a product of his line of thinking at a young age.

“I’m a janitor and these people know it,” Murphy recalls thinking to himself.

Murphy learned to not only accept the role of being a frontline worker, but to also take pride in the job.

“I think over the years I learned to take pride in doing janitorial work because of the type of people that worked in the industry, especially those who worked on the front line,” says Murphy. “Very good, hard working, humble people who I liked to be associated with.”

With some lessons already learned, Murphy and Collins headed off to college. Both would start at Elon University, though Murphy would later transfer to the University of North Carolina at Chapel Hill. Each left school with a degree, life experiences, no money, a load of debt and little clue of what to do next.

“I guess I kind of always wanted to be an entrepreneur, but didn’t know what business I wanted to be in,” says Murphy.