Longtime Janitor Viewed As "Soldier On The Frontline" 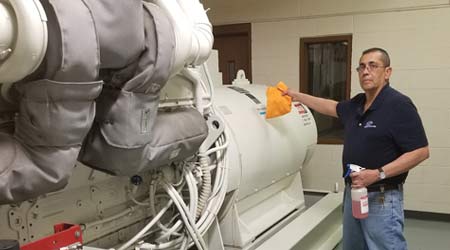 Bernardo Valencia has been a full-time cleaner for SMI Facility Services, Albuquerque, New Mexico, since January, 1995. For years, Valencia provided all janitorial services for executive office and some industrial space as a cleaner, day porter and team supervisor in an eight-story executive office building and communication center. He is currently responsible for the portion of the facility occupied by Century Link and its sister company, Cyxtera.

“At his core, like many others in our service industry, Bernardo is a humble and mighty servant. But do not confuse humble in any way with weak,” says Steve Garcia, vice president and general manager for SMI. “He is truly a soldier on the frontlines of this business, a loyal soldier in the trenches day-to-day and with ferocity in everything he does. He knows he is counted on to complete his duties; he recognizes himself as a kind of last line of defense between order and chaos.”

In a detail-oriented business, Valencia is a master of the details. Whether it is scheduling tasks or responding to problems such as basement flooding, snowstorms or customer complaints, he has always assessed each concern, determined priorities, considered resources, and then executed rapid responses to each situation. It’s the same way he has long approached the daily repetitive needs of the building’s 900 occupants. Century Link is essentially a small city within the city of Albuquerque. Valencia meets each challenge and task as if he were the owner of the facility.

Valencia has serviced the same account during his 24-year tenure and his excellent work has contributed mightily to SMI retaining this contract. In addition, Valencia supervised a long-standing crew, providing the training and direction that led to uniform service day-in and day-out.

He is truly dedicated to the company. Even though he has earned plenty of vacation, he rarely takes time off.

“We always can count on Bernardo to be there. He is governed by the Woody Allen theory of life: ‘90 percent of life is just showing up,’” says Val Garcia, president and CEO of SMI. “Bernardo is uncommonly exceptional in his dedication to his company, to those he has supervised, and to the customers he serves.”

Each month this section will recognize an outstanding frontline janitor. To nominate a deserving employee, send an email to dan.weltin@tradepress.com.