This is the first part of a three-part article about Jason Lee’s new contract cleaning company, Lee Building Maintenance.

It seems like everyone in Frederick, Maryland, knows Jason Lee, CEO and founder of Lee Building Maintenance. The second we step out of his car, Lee recognizes someone he knew, walking her dog. Crossing the road, the owner of a restaurant — not even the one we planned to patronize — sees Lee 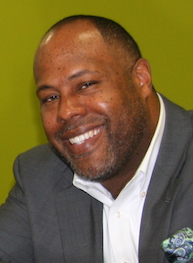 from the window, so we go in to say hello. As we step back outside, someone across the street shouts a greeting. Inside of The Orchard, our destination restaurant, things are no different, as a local philanthropist hugs Lee and introduces herself to me. On our way back to the car after lunch, Lee’s accountant, waiting in her SUV at a stoplight, rolls down her window to chat.

“Do you know that’s real life?” says Janece, Lee’s 19-year-old daughter who works part time for Lee Building Maintenance while attending college. “Wherever we go, we’re there for, like, five hours, because he’s talking to everyone.”

When Lee takes me by his old neighborhood, a public housing complex now called Lucas Village but known as Sagner’s when he lived there, he happens to see someone he grew up with in the parking lot. Even some of the kids standing outside the apartments seem to at least know the name Jason Lee, since Lee is responsible for an employment initiative through the local Rotary Club, and the neighborhood was the first to take part in the initiative.

Lee also serves as an executive committee member for the local

Chamber of Commerce, as president of the Rotary Club of Carroll Creek and as an executive committee member for the Rotarian Initiative for Successful Employment. He is on the board for Frederick County Workforce Services and the local Interfaith Housing Alliance Business Council. He serves as an advisory board member for both Hood College and First United Bank & Trust. Finally, he’s on the membership committee for Building Service Contractors Association International.

Even people who’ve never personally met Lee may have seen his face, because it’s quite literally plastered on the sides of Frederick city buses, courtesy of an ad campaign for Frederick Community College, which Lee briefly attended.

Lee was even named one of Frederick Magazine’s “People to Watch” for 2015.

Some know him from his work in the community. Others in Frederick probably just recognize his face from the buses. But most people in Frederick know Jason Lee as a self-proclaimed janitor. After all, despite being a highly successful small business owner, he still tells people he’s a janitor.

next page of this article:
From Small Cleaning Business Owner To Entrepreneur