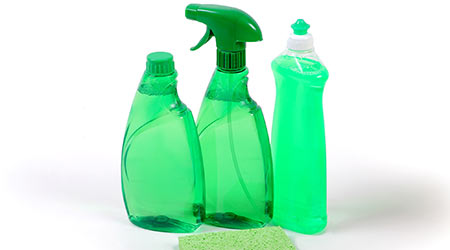 Steve Jobs introduced the iPhone in 2007 and forever changed how the world thinks of cellphone technology. Now, everything from email to real-time traffic information is at people’s fingertips at all times.

Despite the benefits of switching to a smartphone, however, there are still holdouts who refuse to let go of their antiquated flip phones or old-school Blackberries.

The same thing is happening with cleaning chemicals, experts say. Although 95 percent of building service contractors use at least a few green products, according to Contracting Profits’ “2017 BSC Market Report,” there are still plenty of naysayers who won’t ditch traditional chemicals.

BSCs who refuse to go green often say the products don’t work as well as and are much more expensive than traditional chemicals. Those excuses, experts say, are based on outdated perceptions.

“I see it everyday: BSCs still stuck in doing things the way we did it 25 years ago,” says Thompson. “Back then, the chemicals were too expensive and didn’t always work, but that’s not what is going on now. They’re relying on feelings from decades ago to make their judgements today.”

Green became a buzzword in the United States in the 1980s. At that time, manufacturers of cleaning products began offering environmentally friendly alternatives, typically at a higher price tag than traditional options.

Sometimes the price difference was needed to offset the research-and-development costs of new ingredients. Other times, however, manufacturers priced their eco-friendly lines higher because they believed the products appealed to niche buyers who’d pay a premium.

“The industry saw it as a cash cow and set a price the market would bear,” says Thompson. “We did it to ourselves. We overcharged for the green products because they filled a need. The problem is, there was pushback from it.”

Some manufacturers also saw their own green lines as competitive and threatening to their traditional products.

“Some had the philosophy, ‘If we’re going to push this other product, we’re going to keep it separate and price it higher,’” says Charles Moody, president of Solutex, Sterling, Virginia, which earned the Safer Choice U.S. EPA Partner of the Year award for the last three years. “It dis-incentivized people from changing from the established formula.”

To compound the early problems, the earliest green chemicals often didn’t work as well as traditional chemicals. Many manufacturers considered green a fad and rushed products, hoping to cash in before it passed.

“They didn’t take time to get the formulations correct or strong enough,” says Moody.

There also weren’t many third-party certifications at that point, and those that existed often didn’t have rigorous performance requirements, says McFadden.