Part two of this three-part article focuses on Jason Lee’s start in the cleaning industry.

Lee and his wife, April, run Lee Building Maintenance, an 11-month-old contract cleaning company that’s already making a name for itself in Frederick. But Lee is no stranger to the cleaning industry. 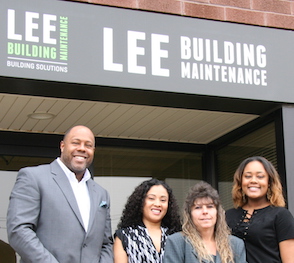 Lee started a window-washing side business in 2000, which eventually became known as Quality First. At the time, he had been paying his dues, moving up the management ranks at a local Burger King when one day, as was often the case, the contract window cleaner showed up. When the cleaner finished the job, he handed the invoice to Lee, who, after years of this happening, finally looked at the invoice and noticed the $68.25 charge for 20 minutes of work. The cleaner told Lee he had a couple hundred accounts.

Soon after, Lee began knocking on doors around Frederick — a family friend’s office, his State Farm agent’s office — asking if he could clean their windows. He slowly began to build a portfolio of accounts in downtown Frederick.

Drawing on his restaurant experience from Burger King, Lee then began talking to local restaurants. He’d ask an owner how many people were responsible for making sure the restaurant wasn’t flagged by the health department. The owner would tell him the chef, the manager and that was it.

“Before you know it, I had the whole restaurant,” he says.

Lee continued to grow his cleaning business, account by account, until he eventually joined forces with a business partner in 2008 to form a new company called Top Quality.

“We both had successful businesses, so we knew if we joined forces we would be able to take a larger market share back from the national companies,” says Lee.

Lee was highly successful at both stops, using his magnetic personality and strong work ethic to grow his business in the Frederick community and put his name on the map in cleaning industry circles.

By 2015, differing business visions between the two partners led to each going their separate ways. Despite the split, the former partners remain friends, says Lee. In fact, they still share a connected office space.

The end to any business partnership may have scared some people from launching a new business so quickly, but, like a true entrepreneur, Lee bet on his established relationships and his reputation around Frederick. The modest Lee is quick to shift praise for his success to the experienced industry mentors he’s met along the way. But the truth is, he has been navigating his way through small business ownership, mostly by trial and error, since his early 20s.