Cleaning: Infection Control
Getting Over The Flu 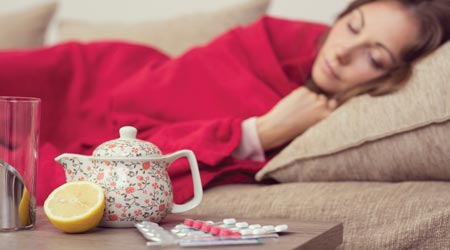 Office buildings, schools, hospitals, shopping centers — no venue was safe from the 2017-2018 influenza season, which experts say was the most widespread, hard-hitting period for the sickness in years. To minimize the damage, commercial facilities across the country tapped their cleaning contractors to do more work than they had planned at the beginning of the season.

The H3N2 flu strand was prevalent for most of the 2017-2018 season. Flu seasons in which H3N2 is prevalent tend to be tougher on young children and the elderly, says Kirsten Norlund, a spokesperson for the Centers For Disease Control and Prevention (CDC).

Pediatric deaths, the only fatalities caused by flu reported to the CDC, reached 171 by early June, matching the previous records for deaths set during the 2012-2013 flu season. The amount of pediatric deaths caused by the flu didn’t reach 150 in any of the previous three seasons. Cumulative hospitalizations also broke records.

The CDC provides surveillance on the origin and growth of flu outbreaks using data submitted from every state. With this data, the CDC is better able to pinpoint regions within each state where the flu is spreading, so it’s not just tracking the overall activity level. Though the CDC can generally see where the flu season starts, it didn’t have that type of luck in 2017-2018.

“This (season) you really saw flu activity come on suddenly throughout the United States,” says Norland.

The CDC was receiving reports in early December of the flu starting in the Southeast, but Norlund says by middle-December it had been found in non-connected areas like the West and Midwest. In January, all states in the continental U.S. provided reports of widespread flu activity during the same week, for three consecutive weeks —the first time such a stretch has occurred in a decade, according to CDC records.

“We have never seen that before in the history of our domestic flu surveillance,” says Norlund. The form of surveillance she referenced has been around since the 2009-2010 season when the H1N1 outbreak led to the first global influenza pandemic since 1968.

During the rough three-week stretch in January, the percentage of patient hospital visits due to influenza-like illness hovered between 7 and 7.5 percent, according to reports provided to the CDC. This is the highest number of flu-related hospital visits in several years. A stretch of a few weeks in the fall of 2009 barely exceeded this season’s three-week gauntlet.

The flu hit the Carolinas really hard in January, says Eugene Kim, COO of Executive Building Maintenance, LLC, which services medical facilities, schools and offices in both states. One of EBM’s clients, a North Carolina-based company, reached out in January to see how it could be more proactive when a few of its patients fell victim to H1N1 after traveling internationally. Kim suggested the company ramp up its service beyond the cleaning taking place at night, a strategy KBM executed four years earlier.

“I told them you really need someone during the day to help clean touch points in the facility,” says Kim. “It’s about how you discuss the matter with the customer and they agreed with what works for preventing (the spread of H1N1).”

Kim says CBM uses CDC guidelines and presents them to the customer to help convince them that this practice is a good option. Because the building being serviced had a great amount of doors, Kim says the day cleaner put great focus on the cleaning of door knobs and push bars — anything that had to be touched to move in or out of an area. The worker also cleaned just about any area that would come in consistent contact with hands.

Soon after the hire, the infections calmed down and that temporary employee was no longer needed.

The stakes of cleaning public schools is increased in states where the amount of funding is predicated on attendance — if the students are too sick to be there, there’s less money available. One such state is Texas, the home McLemore Building Maintenance, Houston.

One add-on service request that McLemore Building Maintenance would get is electrostatic cleaning, a process for applying liquid to a surface that works by charging and atomizing a solution, delivering a powerful flow of droplets, which are charged by the application of an electrical current as they exit the sprayer. The charged particles are attracted to all surfaces, even the backs of them, with a force stronger than gravity, allowing the solution to easily reach and uniformly cover.

When in schools, McLemore says his company takes the electrostatic sprayer into classrooms, placing particular focus on desktops.

Electrostatic disinfecting seems to be the infection-prevention tool of choice, among BSCs. All Seasons Cleaning Management LLC, Cedar Rapids, Iowa, will begin offering its customers electrostatic cleaning services for the 2018-2019 flu season, says Bill Pearson, COO. The company would have liked to begin performing electrostatic cleaning in 2017, but Pearson says the company was not ready for it from a marketing standpoint.

Pearsons says it is important that the company begin using the electrostatic technology, because the window of time in which offering the item will stand out might only be two years.

The CDC doesn’t make predictions on how good or bad a future flu season will play out. To stay healthy through the flu season, the center recommends individuals get a flu shot, take anti-viral medications and wash hands. Should someone be infected, the CDC recommends that person stay home and out of public if possible. The cleaning of objects that could become infected is also a good preventative measure, says Norlund.