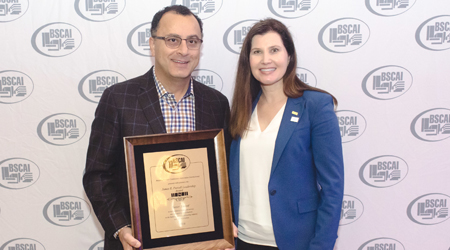 The BSCAI CLEAN Awards were presented at a lunchtime ceremony during the association’s Annual Convention in Chicago on Oct. 28. Awards presented in 2016 honor achievements in 2015. These prestigious awards are among the highest honors bestowed by Building Service Contractors Association International. Congratulations to all the winners.

“We were honored to have such great candidates this year,” says Lance Ford, co-chair of the CLEAN Awards committee. “All winners were well-deserving of their awards.”

This annual award is given in recognition of long-time service to the association and the building service contracting industry. The previous year’s BSCAI President is honored with the award. This year’s winner is Yasser Youssef, president of The Budd Group, Winston-Salem, North Carolina.

The Budd Group was already a long-standing member of BSCAI by the time Youssef joined the company in 2004. Youssef began his career primarily in the staffing industry and was the founder of Workforce Solutions, a human resources consulting firm.

Once aboard The Budd Group, however, he wanted to learn more about the BSC industry. So, he became heavily involved in BSCAI. Youssef was elected to the association’s board of directors in 2010 and served as president in 2014. During his tenure, he helped to provide training resources for members and fostered peer communication. After his presidency, Youssef remained committed and active with the association.

“Yasser is engaged with BSCAI; he takes his past presidency very seriously,” says Tom Kruse, co-chair of the CLEAN Awards committee. “He has set the standard for involvement in his company and now his staff is engaged and more involved with the association.”

Youssef’s driving goal is to create a culture of change, growth, leadership excellence, innovation and continuous improvement. He says he has been blessed by the investment of others in him, and credits healthy relationships, such as the ones with his parents, mentors and colleagues for his success.

“Being the recipient of the James Purcell award is a great honor,” says Youssef. “I want to thank the Budd Group, the BSCAI staff, my colleagues and friends in the association for allowing me the time to serve and affirming my involvement.”

This award is presented to a BSCAI member who has made outstanding contributions in furthering the programs and image of the association and the building contracting industry. This year’s winner is Michael D. Knight.

“We appreciate all of Michael’s efforts with the association,” says Lance Ford, co-chair of the CLEAN Awards committee.

Knight has been a critical component of BSCAI’s resources over the years, most recently with its Virtual Roundtable program.

“It’s an honor to win this award,” says Knight. “It’s a culmination of a career in this industry. I am very passionate about this industry, and I appreciate being recognized for that.”