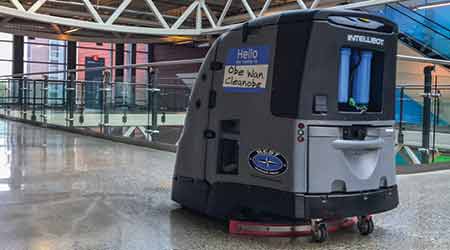 BEST’s commitment to corporate responsibility is put into practice through the service the organization provides to Southern Alberta Institute of Technology (SAIT) and British Columbia Institute of Technology (BCIT) — higher education institutions with state-of-the-art buildings where hundreds of students attend daily classes. In 2016, BEST sought an environmentally friendly solution to efficiently clean floors at SAIT’s Aldred Centre, home to its school of trades and technology. The Aldred Centre is a stunning landmark with large glass walls, and at 442,000 square feet, it is the largest building in its complex.

Greg Bratland, BEST operations manager, sought a new way to clean the floors at the Aldred Centre. After seeing a demonstration of the TASKI robotic floor machine from Diversey, Charlotte, North Carolina, Bratland presented the machine to SAIT facility managers as an addition to the floor care program.

The TASKI SWINGOBOT impressed BEST with its ability to operate hands-free while staff continued to clean in other areas of the building. It also showed impressive signs of reduced water and chemical use compared to the standard floor cleaning equipment being used, and was more energy efficient.

“The TASKI SWINGOBOT showed immediate advantages with the recycling of water, allowing shifts to run on one tank where previously the cleaning staff had to dump and fill multiple times per shift,” says Bratland. “It took about 15 minutes to dump and fill (three to four times on a shift), which meant up to an hour of time was being wasted. Plus, we were using more chemicals.”

The recycle capability of the TASKI SWINGOBOT can generate up to 85 percent chemical and water savings each shift.

The TASKI SWINGOBOT replaced a manual scrubber that held 29 gallons of water that needed to be dumped and filled three to four times a night. Continued use of the robotic autoscrubber significantly reduced water usage in the Aldred Centre, using less than 14 gallons per night where previously 87 to 116 gallons of water was used per night.

BEST invested in the TASKI SWINGOBOT to provide SAIT with cutting-edge technology that would improve the quality of floor cleaning while using less energy and resources. The machine’s Hands-Free Cleaning technology allows the operator to quickly switch between manual and hands-free cleaning at the push of a button, providing the opportunity to multitask while the floor is cleaned.

The operating system offers area, spot and map clean options and incorporates up to 17 sensors, giving the robot a 360-degree view of its surroundings so it can operate and clean on its own. Sensors detect obstacles including stairs and people on campus, stopping the machine to either go around an obstruction or allow it to pass.

The TASKI SWINGOBOT map clean option is utilized for the complex layout at the Aldred Centre. The unique feature allows the unit to detect the interior glass walls and escalators within the five-story atrium.

“We have used the SWINGOBOT for 12 months without any issues, and the safety profile is outstanding,” says Bratland. “Any risk of hitting walls and surfaces is greatly reduced because there is no driver error.”