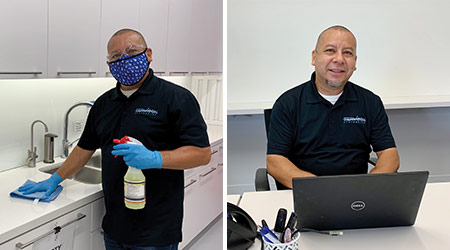 Carias has thrived in his nearly 25-year career, despite the fact that English is his second language. Carias started his career with little knowledge of computers, but now completes tasks on Microsoft Excel and sends out emails. Photos Submitted By Servicon Systems

It has been nearly a quarter century since Henry Carias began working for Servicon Systems, Inc., Culver City, California. And if the company could have things its way, business wouldn't go back to the days before Carias. That's because the full-time employee is the type of resourceful team members all businesses crave.

When Carias started his career at Servicon Systems, he was at a disadvantage. Not only did he lack computer skills that he was eventually going to need in his position, English was also his second language. But Carias took the initiative to learn Microsoft Excel, how to email and how to complete work orders. He also worked on his English so that he could better communicate with customers.

Carias has passed on the knowledge he's acquired to others. In fact, he has assisted several of the company's janitors in becoming United States citizens.

"Henry not only directed his co-workers on how to apply for a change of status, but he also created flashcards to help them study for the exam," says Sergio Pena, an area manager with the janitorial services company.

Pena says that Carias always brings a positive attitude to work and uses his great sense of humor to build better relationships with his team members.

"Henry is a loyal member of Servicon having been with the company for 23 years," says Pena. "He always operates with the best interests of the company in mind and is a shining example of Servicon's work culture."

Each month this section will recognize an outstanding frontline janitor. To nominate a deserving employee, email jake.meister@tradepress.com