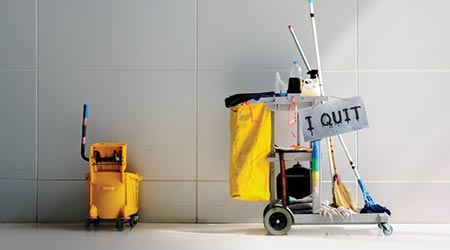 “Turnover is just a fact of life in this industry.”

Bryco Services’ staff can be somewhat of a revolving door — just like so many others in the industry with its stable of frontline employees, almost all of which working evening or night shifts part time.

Lazorik says most of the company’s current janitorial staff has been with Bryco Services for more than a year, if not two years, but the people working in those positions typically leave after six months.

A poor employment climate, like that of the Great Recession, bodes well for building service contractors — when jobs aren’t there, employees like the stability of the position and the income. However, a good economy — like the current marketplace — has the janitorial workers jumping ship for higher-paying jobs.

While Bryco Services pays cleaning staff above the minimum wage in the state in which they’re working — Indiana and Illinois ­— they can’t compete with the bigger companies willing to spend $15 an hour when the economy is in good shape, and neither can most others BSCs. Job applications are also harder to come by during those times.

“When the economy is booming and doing very well, we find it’s harder to get applicants in the door,” says Lazorik.

Fewer applicants means it’s crucial that BSCs keep the employees they already have and address the root causes of turnover.

Tom Kruse, senior vice president of mergers and acquisitions at Marsden Holding, St. Paul, Minnesota, came to the company when it bought his previous employer, Scioto Services, in 2005.

Scioto had a workforce of 1,000 people and began to experience high turnover in the early to mid-1990s.

Scioto began to focus less on the things it couldn’t control and looked more to fixing the things the company could impact, such as the hiring process, management and the work environment — all things that commonly contribute to turnover if not handled properly.

Kruse says the company then began to collect data to understand why janitors were quitting and why they were staying.

One of the first tools used was the exit interview. In an effort to maximize participation, Scioto had department employees participate in an exit interview before being provided the last paycheck. The company would then randomly select 25 percent of the people who participated in the exit interview and ask them to sit through a more comprehensive interview used to determine the key reasons people were leaving. Kruse says participants couldn’t use compensation as a reason they left the company because Scioto was paying the employee at least the same amount as was agreed upon when the job was accepted.

Using the exit interviewing, Scioto found these workers were often leaving for the same reasons. Kruse says the most common reason for leaving was the manager.

Problems with managers might be that they aren’t empathetic to the departing employee as a human being, aren’t organized, or aren’t kind to the worker. The manager might also fail to make the employee feel that their work has value.

Managers can also create a toxic environment by bungling their priorities. Tim A. Garrett, founder and principal at Diversified Performance Solutions, Marysville, Ohio, says the primary goal of a leader should always be putting the organization they’re representing in the best possible position to succeed, followed by their co-workers and employees, and lastly their own well-being. A boss who puts his or her current or future well-being first fails the most because they view the employee as the means to fulfilling his or her goal or job status, rather than a human that helps to lift the company to its desired heights.

“My position is you lead people and you manage output,” says Garrett. “The biggest problem I see is too many ‘bosses’ are all focused on managing output and not on leading the people who create the output.”

There are some traits that humans cannot be taught. Leadership is one of them. While a person cannot learn how to be a leader, Garrett says an employee can be taught the concepts and principles of leadership, that when used in conjunction with actual experience, help to make someone better suited for a leadership role.

Even with all of these lessons, those tapped to hold a leadership role should have one common trait: good character.

“A leader can mute certain characteristics (negative traits) but they are always going to be there,” says Garrett. “Therefore, when looking at leaders one can never underestimate the importance of character.”

Supervisors should also be taught to stay consistent with employees. Obviously, not all situations are alike, and as a result, one might require one response while the other necessitates a different approach. It’s the similar situations, the two that are alike, that require a similar approach.

Good managers also lead to better hires. It’s advantageous to hire a person who was suggested by a co-worker because the prospective employee probably heard about the manager’s leadership style from the reference, making he or she more likely to know if they will mesh well with the boss, says Michael Diamond, managing partner of AffinEco, LLC, Bridgeport, Connecticut. A referenced employee is also more likely to work hard because they want to do well by the person who suggested them, says Diamond.

next page of this article:
Good Company Culture Helps Keep Cleaners Around