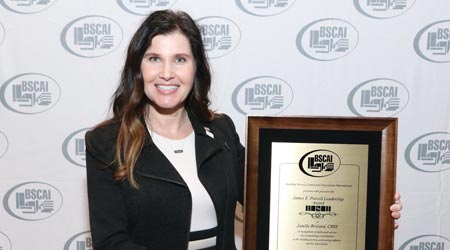 The Building Service Contractors Association International (BSCAI) CLEAN Awards were presented at a breakfast ceremony during the association’s Contracting Success Conference in Dallas. Awards presented this year reflect achievements from 2017. Winners for the tribute awards are determined by the BSCAI Awards committee.

This annual award is named after BSCAI’s founder and first president, and is given in recognition of longtime service to the association and the building service contracting industry. The previous year’s BSCAI president is honored with the award. This year’s recipient is Janelle Bruland, president of MSNW Group, Ferndale, Washington.

Bruland’s company humbly started in her living room in 1995. She didn’t have a background in the contract cleaning industry, but had plans to earn income by running a small cleaning company while she raised a family.

Bruland joined BSCAI in 2002 and instantly benefitted from access to fellow business owners that could help her learn the industry and solve challenges. As her company and success grew over the years, she has turned around and has become a mentor to others, offering advice from her experiences.

“From the first BSCAI conference I attended, I was warmly welcomed and brought into the best resource there is for building service contractors to network and grow their businesses,” says Bruland. “It has been a wonderful exposure to industry associates in the United States and around the world, and my business has been positively impacted because of the knowledge and relationships I have gained.”

Nearly 15 years after joining the association, Bruland became president. During her tenure she promoted BSCAI’s value proposition as the No. 1 resource to building service contractors and continued to strengthen and improve the education offered at the annual events.

New Member Of The Year Award

This award recognizes a company that joined the association within the last three years and has exhibited active participation in BSCAI through its committee involvement, event attendance, or participation in the certification program. This year’s winner is SparkleTeam, Boca Raton, Florida.

Tired of receiving poor janitorial services, Henricus Cox and Arely Castellon decided they could do better and started their own contract cleaning firm in 2003. They incorporated a sustainable approach to cleaning at all their accounts and used LEED guidelines to build their programs.

SparkleTeam joined BSCAI in 2017 and both owners have been active in the association ever since. Both have shown tremendous interest in the association and have attended numerous conferences. Cox even spoke at the 2017 Contracting Success Conference.

“Cox and Castellon are very enthusiastic about participation, have formed numerous relationships and friendships within the association and their company is built for success,” says Robert Stewart, co-chair of the CLEAN Awards committee.

next page of this article:
Rare Distinction Bestowed To BSC