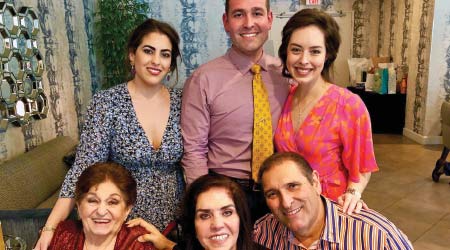 The whole Barrios family works together to make a successful business

When Rene Barrios fled Cuba in 1965, he had nothing.

He arrived in Key West as an eight-year-old kid with only the clothes on his back and a dream that one day he could create success in the United States. With his newfound freedom, he started working as a janitor for USSI, working his way up to supervisor and eventually opening his own company.

It’s that work ethic and passion that drive his children — Roger and Giovanna — to be the best they can be, and to continue to grow and evolve what their father created.

“I never had doubted that this would be my only career,” Roger said.

The Barrios siblings are the momentum of Florida Cleaning Systems, Inc., a facility services company based in Altamonte Springs, Florida, and a proud BSCAI member. Roger, RBSM, acts as the vice president of operations and his sister Giovanna, RBSM, is the chief administrative officer. Their father, Rene, CBSE, is the president and their mother, Ivette, is vice president. While their father oversees the business, it’s up to Roger and Giovanna to make sure everything is operating on all cylinders during the day-to-day.

From The Bottom Up

The Barrios family has cleaning in their blood. From the time they were teenagers, Roger and Giovanna were traveling along with their father during summer vacations and after school, helping clean the many facilities their father managed.

They recalled their dad picking them up from high school and going to jobs. Once, they were tasked with cleaning new gym equipment in a new country club. Rene took out a rag, gave it to them and put them to work.

“It felt like an eternity,” Roger recalled. “Then four hours later I was done, and I knew this was something I wanted to do.”

Giovanna took a slightly different route. While she always knew she would one day work with her family at the business, she wanted to make sure she sharpened her skills to be savvy in all aspects of business. She attended law school and learned about the administrative tasks it takes to run a business: contracts, human resources and sales, to name a few.

“I don’t think I ever saw myself doing anything else,” she said. “I went to law school for the company, which helps me in many different capacities at work.”

As the family’s grown, so has the business.

Rene’s first business grew to 300 people before he sold it in 1998. After a brief retirement, Rene and Ivette opened Florida Cleaning Systems, putting his family at the helm. The first employee they hired still works there as an operations manager, and many others have stayed with the company through thick and thin — recommending their loved ones for positions there.

Roger’s wife Addison even works there now, acting as the company’s director of accounting.

“We’re a family, and we employ countless families,” Roger said. “There’s a lot of passion behind this. This is a people-oriented business. If we can take good care of our people, we will have good service for our customers.”

The company also focuses on hiring minorities and promoting within, giving people the chance to move from cleaning floors to a C-suite — like their father once did.

And it’s paying off. The company currently has more than 500 employees throughout Florida and Georgia, with contracts throughout the south. Their main focus of business right now is in airports — they currently service some of Florida’s biggest airports.

But they said the business growing isn’t what makes them feel like they’re a success. Knowing their business is full of respect and love — and knowing their family has their back — is something money can never buy.

“Our parents are extremely proud,” Giovanna said. “They show us how much they trust us every day that they let us run the business.”