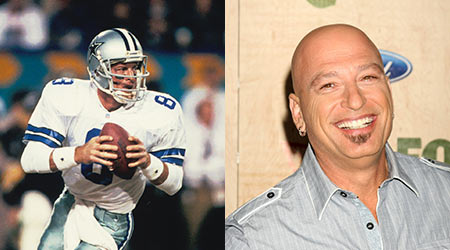 Comedian and America’s Got Talent host Howie Mandel and inspirational and gritty former NFL Dallas Cowboys quarterback Troy Aikman will be the 2017 ISSA Keynote Speakers during the ISSA/INTERCLEAN North America 2017 Trade Show and ISSA Convention, September 11-14 in Las Vegas, according to ISSA, the worldwide cleaning association.

“With the high-quality of the selected speakers, these entertaining addresses will be can’t-miss events,” says ISSA Conventions and Meetings Director Kim Althoff. “I can’t wait to hear what insights these gentlemen share for attendees to bring back to their everyday lives and businesses.”

Aikman will be speaking on Wednesday, September 13, at 9:00 a.m. Mandel will be closing the show, speaking on Thursday, September 14, at 2:30 p.m. His expert stage presence is just another reason to stick around through Thursday — as is the chance to be a Dallas Experience winner (see details below).

Meet the Speakers
Canadian born TV personality Mandel has amassed a prolific career lasting more than 30 years. While many know him from his current stint as a judge on the widely popular TV show America’s Got Talent and his role as former host of the game show Deal or No Deal, he also participated in a wide variety of other shows. One such role was Mandel’s Emmy-nominated, animated show, Bobby’s World, which drew from his real-life experiences, aired for eight seasons, and still enjoys syndication in 65 countries weekly. Mandel’s success is not limited to solely one media. His memoir, Here’s the Deal: Don’t Touch Me, that covers a variety of topics and personal issues—including his self-proclaimed germaphobia—was a New York Times bestseller.

Aikman spent his entire 12-year football career as the quarterback for the Dallas Cowboys. Entering the league as the first-overall pick of the 1989 NFL Draft, he enjoyed legendary success, setting 45 franchise passing records and leading his team to six divisional titles, four conference championship games, and three Super Bowls—a feat done by only three quarterbacks besides Aikman in the history of the NFL. Aikman was inducted into the Pro Football Hall of Fame in 2006; and his work as a five-time Super Bowl broadcaster for NFL on Fox earned him an Emmy nomination.

Get the Dallas Experience
Following Mandel’s address, six lucky individuals will receive a golden ticket to a unique Dallas Experience—one of several great prizes, including tickets to the Dallas Cowboys second regular season game, a shopping trip to Neiman Marcus, a trip to Wild Bill’s for cowboy hats and boots, or another adventure valued at $1,000.